The differance between official and unofficial (Orfi) marriage contract in Egypt

It is become so common in the life now these problems that came after marriage  special from foreigner wife, because she doesn’t know that her…

Let’s start from the legal conditions for marriage according to Islamic rules, the marriage in Islam has to get these conditions to be legal:

But by law government found last 100 years the husband makes troubles if there is no official document proofs that marriage so they make a rule that any marriage must be by official way, that is more care about wife and child rights.

Also Islam rules and law gives the wife and husband a right to write any condition in the marriage contract, if it isn’t contrary to the concept of marriage and conditions.

So by Islamic law no different between the official and unofficial marriage if all conditions for the marriage are available but even by the purposes of Islamic rules that care about rights of wife and child, because of the actions of human beings change, the official contract is better for such life now.

But the question is what will happen if the husband after marriage doesn’t want to admits the marriage in this case we must us the law to proof that this relation is legal, but law says that will make difference between official and unofficial marriage contract.

The official marriage gives the wife full rights plus that she can write all her conditions as she want. But the Orfi. ( un official contract) gives the wife only two options;
First one to proof that she has a legal relation with her husband, but this through file up case in the court. After that she will get only ability to proof that the child who came from this marriage is from this man nothing more.
The second one is to ask about divorce when she wants. The future child from this marriage will be under risk if father doesn’t want to give him his name; in this case the wife has to file up case to let the child get that right. Also according to orfi  wife doesn’t have a right about inheritance, also the child before get his father name doesn’t have.
From that all you can see that the marriage conditions that will be through orfi are nothing, because the only rights from that marriage as you see are the proof about the relation and the ability of divorce.
The official marriage cares about the wife rights  by 100%. From a lot of sides like; 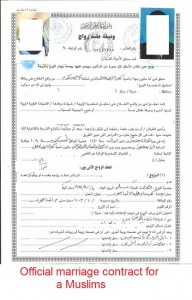 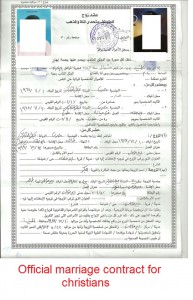 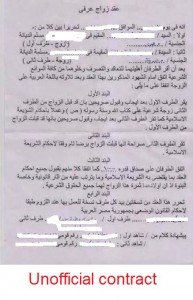